After using Lexicon for a while I’ve found that I prefer different mix in / out points than those marked by the auto cue generator.

So I started using the Cue Anchor templates, which provide:

However by using this I don’t get a Breakdown cue set or the second Drop that was previously set with the auto cue generator.

So, what I’m looking to achieve is a three step process:

What seems to be happening is running step 3) ends up deleting the Breakdown and Drop 2 Cue, when I’d like to retain those. When running step 3 the overwrite cue “Overwrite existing cue points” option is unticked in the Generator Template.

I’ve also tried this the other way around, using the Cue Anchor template first, then running the Auto generator for Breakdown and Drop 2 cues with “Overwrite existing cue points” unticked in the Generator Template, but again, this doesn’t generate the Breakdown or Drop cues.

Is there anyway to achieve my desired outcome?

I think you’re almost there, try checking the Breakdown and Drop 2 in the generator template (last screenshot). They’re getting removed because they aren’t enabled there.

Also maybe a suggestion to skip the first step completely and set the breakdown and drop manually, isn’t that only slightly more work but does give you 100% accurate cues? That’s how I would do it in this case.

I’ve been a bit of a track buying spree so have a large number of tracks to process, hence preferring some auto generated if we can. I find the breakdown and Drop detection pretty accurate in the vast majority of cases.

I tried again checking the Breakdown and Drop 2 in the generator template, but after running, the auto generated breakdown and drop 2 cues are still deleted, even though Overwrite existing cue points is unchecked.

Are the cue names Breakdown and Drop 2 identical to your custom cue anchor names? And color if you have set one up in the anchors.
If there is a mismatch there, it won’t find the breakdown (or drop 2) and then it can’t set them because as far as LXC knows, they don’t exist.
Maybe a trailing space in either the anchor or cue name?

I’d have to check with your library. I won’t have time for a week though, but upload it with description (link this topic) and I’ll respond when I get the time.

Awesome, thanks - much appreciated. Uploaded.

I think the problem is that in the Cue Anchors popup, you didn’t select a break anchor.

Without it, Lexicon doesn’t know which cue to use when trying to match the breakdown.

As mentioned “I tried again checking the Breakdown and Drop 2 in the generator template, but after running, the auto generated breakdown and drop 2 cues are still deleted, even though Overwrite existing cue points is unchecked.”

Break cue and Drop 2 cue have been deleted

What am I missing here?!

Can you show a screenshot of your custom cue anchors? 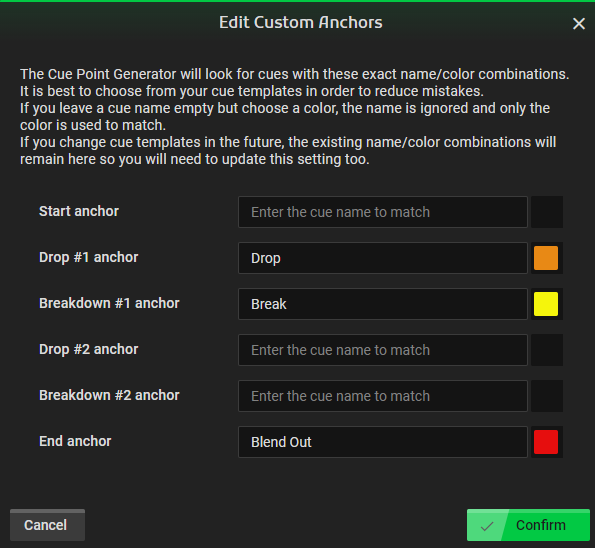 I added the Break one

Ah, so is it here that I need to add the Break and Drop 2?

I have a very similar issue trying to use custom anchors. I have a 3 step process: 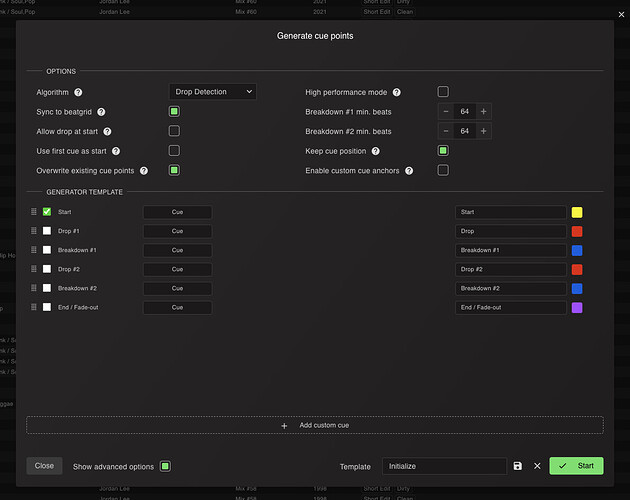 Which will generate cue points that look like this: 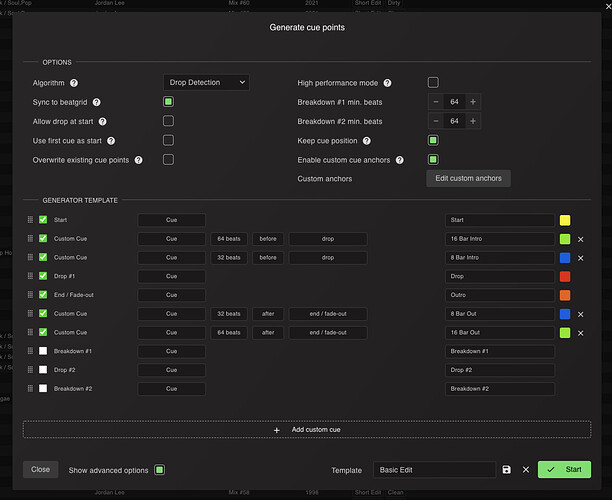 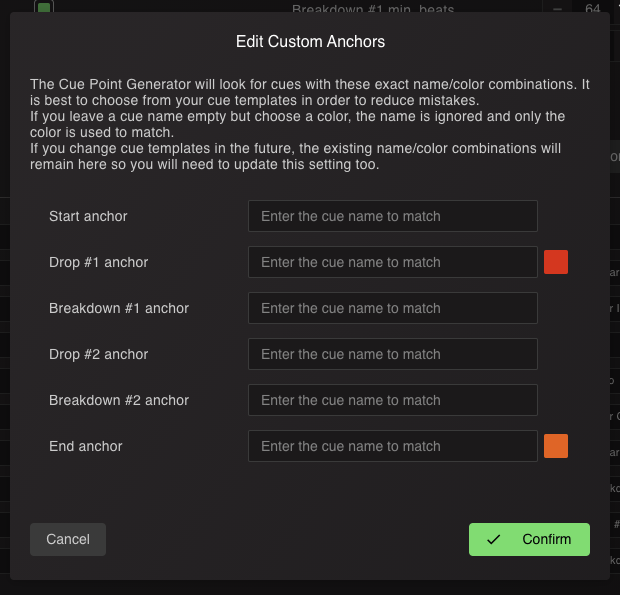 And it will generate cue points that look like this:

After running the 2nd template, the start cue point disappears, and I’m missing cue points #6 and #7.

Where is your Outro cue? Maybe the 32/64 beats after that are no inside the track anymore?

I thought that might be the case, but it’s like 16 bars from the end of the track.

In the Edit Custom Anchors popup, can you also enter the name of the anchor? So Drop and Outro in the right fields. Then try again

And are you on the latest Lexicon?

Looks like I figured it out. I also upgraded to the latest beta (not sure if that had an impact).