Getting some kind of path error for certain music

Lexicon version: … There’s literally no obvious way to find out the version, since there’s no “about” option in the pull down menus, but just updated today.

When syncing to rekordbox, a bunch of songs went from a file path of “/volumes/drive name” to “Studio / volumes/drive name” and Studio is the name of the computer. Now that it’s been added to the path of those songs, those songs are greyed out, but there’s not option to locate the missing file like you see with the yellow triangle and exclamation point.

When I checked the path of those songs in Lexicon… they’re all normal, but when I sync back into rekordbox, there are 28 tracks that keep that “Studio” in the front of the file path. 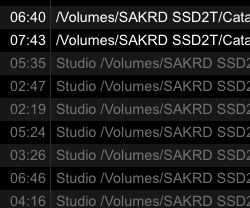 Do you also see this “Studio” thing in Lexicon? Or only appears in RB after the sync?

No… the paths in Lexicon are correct, but for some reason in Rekordbox it has a different path for those particular tracks

Can you upload your logs? From the Help menu in Lexicon. It’s right above the About button

Have you used Cloud Sync in Rekordbox by any chance?

The Studio part can’t come from Lexicon and your Lexicon library is in normal condition. I suspect it’s something RB does, maybe Cloud Sync where it tells you from which computer those tracks were uploaded.