How to sort by Missing Files? Lexicon changing "\" to "/" breaking links

I have some folders of music which has backslashes \ in the filename.
Serato did not have a problem using these file names, but when I import my tracks to Lexicon, they are missing.

Looks like Lexicon is changing the backslash \ to a forwardslash /, thus thinking it’s in a subfolder and is missing.

Is there a way to batch fix this? I tried pointing lexicon directly to the folder but it won’t link them.
If I have to do this manually, how can you sort all the Tracks with the missing ones groups together?

I don’t think a backslash in the filename is allowed by any operating system. So you’re best of removing them from the filename altogether.

Since the filename changed, you’d have to relocate them one by one manually. Right click any missing track and relocate to point it to the new filename.

You can get a list of all missing files by creating a smartlist with the Is file missing rule.

However not so great, there is 21, 866 tracks with backslashes which would need manual adjusting.

This equates to days of manual work, which is what Lexicon is supposed to eliminate.

If I sync with Serato it will break all my links (while Serato is fine with them as is).

Sort of negates having a separate program for organizing a library if it breaks the links of a working library.

No other solution besides doing it 1 by 1?

I’ll have to look into getting Lexicon to work with backslashes in the filename. I didn’t think that was legal but it appears Mac is okay with it.

I’ll get back to you in a bit.

You can use the Replace Text recipe to replace EDM/ with EDM\, then the tracks should work again.

But I would really recommend getting rid of those backslashes because I can’t guarantee they work in all DJ apps. This is one way to do it in bulk: Guide: Moving and renaming files automatically | Lexicon - DJ Library Management

You can use the Replace Text recipe to replace EDM/ with EDM\, then the tracks should work again. 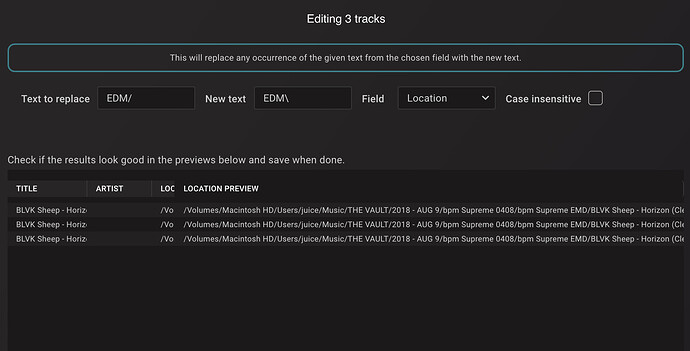 Unfortunately this method does not work. Program still reverts the backslash to forwardslash.

So I can’t move onto the next step of getting rid of the backslash since they are all still “missing”.

I can add a fix to the next beta version update so those backslashes are kept on Mac. Might release that update friday or after the weekend.

That would be awesome, then I can do the batch edited and get rid of them as suggested.

I looked into supporting backslashes but it’s not possible in Lexicon. Backslashes are a special characters on all operating systems and can’t be used like other characters. So I can’t support them.

The only thing you can do is remove the backslashes from your filenames (there are bulk rename tools for that). Then you can use the earlier recipe to change where Lexicon looks for the tracks. I would change to slash to an underscore _ in your filenames and then Replace Text with EDM/ to EDM_.
Then Lexicon should see your tracks again.