Result: Tracks are in RB6, Correct Folders and Playlists, Have correct Genre put in, but are entirely unprocessed.
→ No Waveform, no beatgrids, no Cue Points 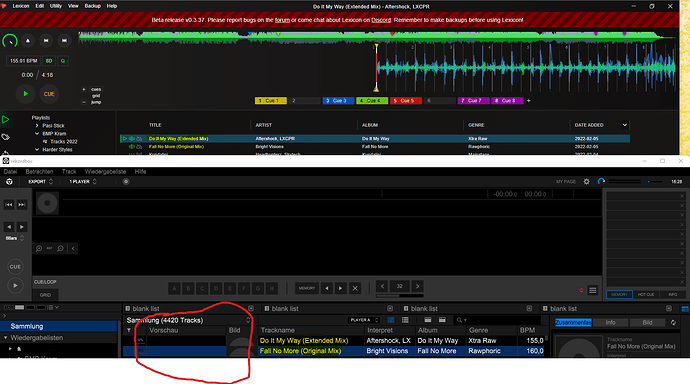 It’s normal not to see a waveform preview in RB since RB generates that data and LXC does not.

Do you see the correct beatgrid and cues after loading a track in RB?

i played around with it a little. Yes the cues and beatgrid appear as soon as the track get loaded the first time.

Ofc then i was hit with shifted Beatgrid so i had do run the beatshift correction (as it was new tracks) and it turned out fine.

I have done around 15-20 Syncs now; way more from LXC to RB than the other way round and have not had a single crash or bug other then beatshift, Tags not updating when i hit “Write Tags to file” while in the incoming folder (Could not replicate yet, just hit it again :D) and what i mentioned here (which is not a bug but me messing up, as we found out :D)
Great work so far! With this i can now really bring LXC to good use! The direct import was what i needed all along.
Cheers!

But keep making backups because I’m sure there have to be bugs in there!