Just ran into this issue after updating both Engine DJ and Lexicon to the latests versions.

Bug description: Playlists not visible when importing collection from Engine 2.2.0

Step by step to reproduce:

Result: No playlists are visible to import

Screenshot:
If this is about a DJ app, please also add screenshots of the problem in that DJ app.
Lexicon: 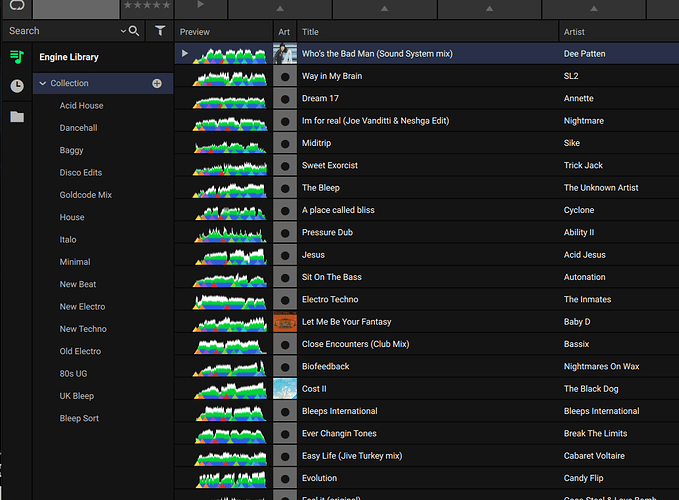 This sometimes happens to some users and I still don’t know why. Can you check if you have any other Engine Library folders on your computer? There is always one at Music/Engine Library and there can be one on every external drive you have.

I copied over the Engine Library directory from my music drive to my user folder, and I was able to see the playlists in Lexicon - but then, the paths for all my tracks seemed to break, and even with re-locating the files, the database remained unuseable. I restored both Engine Libraries from backups.

Could you make the Engine Folder selectable? I’m wondering if Denon has changed the db update behavior with 2.2.0 because another tool I use (tuneup Prime) is also having errors writing to the db after I locate missing files.

Thanks for your work on this project!

You shouldn’t move or swap the Engine Library folders, they’re not designed that way. Then your tracks will become missing.

I don’t think the 2.2.0 update has anything to do with it, this problem already existed before that. It’s just that it only rarely happens so I don’t know why yet.

Can you send me both your Engine Library folders? You can zip them and upload to this link. Make sure to name the zip files so I know which folder goes where.
If there is a Music folder inside, don’t add that cause it would be too big.

I’ll see if I can find something in your databases.

Can you also describe how you use Engine DJ? Where do you add the tracks? And do you use the sync manager or do you add playlists directly on the external drive?

Thanks, I will take a look tomorrow and get back to you

Okay it appears to be the same problem some other Engine users are having. Your playlists are set as deleted/invisible in the database and I don’t know why Engine does that. But I have an idea how to handle it better, so I’ll make update for Lexicon that should fix it. Should be released in the next few days!

The next update will have a new import option: Extra: Missing playlists. This is a troubleshooting option for users that are experiencing this specific problem.