[Sync] Option to import colors is missing (or not included)

Bug description:
An option to import colors is missing (or not included) in the “import specific fields only” menu. Without this option, colors are NOT imported if ALL the tags are not selected.

I noticed this while attempting only to import beat grids and cue points.

Screenshot:
If this is about a DJ app, please also add screenshots of the problem in that DJ app. 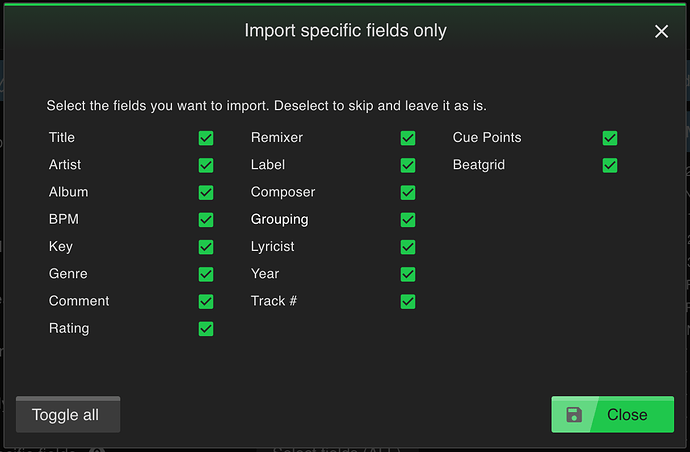 Thanks, I’ll look into that

Excuse me, but… Why not also include the same options with selectable fields in the export?

Because the idea of Lexicon is to manage your library in primarily in Lexicon. So if Lexicon is 100% right, I don’t see any reason why you would only need to export some fields instead of always all of them,.

I agree with @djjatoro. There are some instances where I would opt to workaround/isolate an issue only to realize that the feature is not in place.

But I had to pause because I have a gig coming up, and I’m uncertain of how many tracks have been affected. I was running a practice session yesterday, so I noticed the ongoing issue. Btw, I had searched and came across a post about first “importing” the beat grids before exporting. I made certain I was following that process and still tracks were affected despite LXC having the correct data.