Here are the first test builds with support for writing directly to the Rekordbox 6 database. Bye bye XML!

Simply select Rekordbox 6 from the Sync page. There’s nothing else to it.

Obviously backups are more important than ever! Lexicon already automatically backs up your Rekordbox database but it certainly can’t hurt to do it yourself as well.

These files are backed up:

To restore a backup, just replace the master.db file with the one from the backup file.

Some thing regarding RB5 as well?

No, this is only for Rekordbox 6. RB5 is still with XML and will stay that way.

Will give this a spin tonight

Not sure if this is even related to the new RB sync but on the sync screen on the new build with RB6 selected I’m seeing it constantly flicker between “Select the playlists you want to sync…” and the loading spinner. 2 seconds on one message then flickers to the other and back

Also got an error on the sync itself trying to sync my “RBSyncTest” playlist. Will upload my logs/db 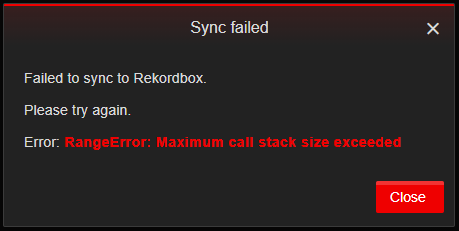 New versions in the first post with some minor fixes.

@Scythe I haven’t seen either of those 2 bugs, can you reproduce them?

Didn’t have either issue on the new build.

I synced a playlist across. I think most of these tracks had been in RB at some point previously but a couple of tracks have come across with RB not being able to load the beatgrid data (prompting to do analysis with grid force checked, unable to uncheck). That doesn’t seem normal? 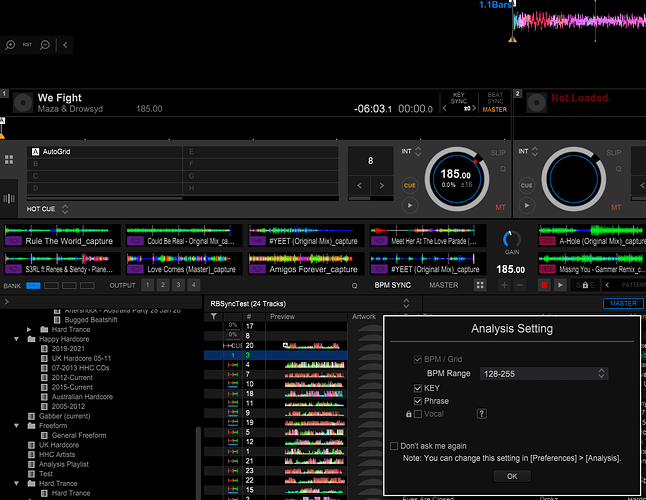 I’m also not sure how I feel about the option to lump all tag categories into a single MyTag category. because that kills the AND/OR potential of MyTags when filtering a playlist (Which I’d argue should be a more common use case for MyTags given most us are now creating our intelligent playlists in LXC). Keen for others thoughts on this but I’d rather each Lexicon tag category as a unique MyTag Category and then I can just position the 4 tag catories I want to make use of for playlist filtering and smart playlists at the top of the stack (Or do this in LXC, having the 4 most important categories first). 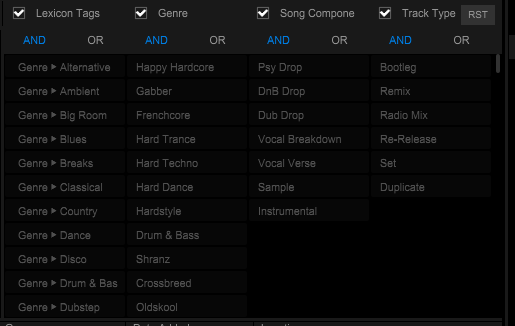 If Rekordbox didn’t have the weird limitation then you’d have all your categories. I don’t really want to go through weird hoops to combine all LXC categories into 4 RB categories which would still be limiting in many scenario’s.

Can you upload your database? It’s the “We Fight” track that is problematic?

Sending a new DB copy through.

Were the 3 tracks in that playlist with the missing beatgrid data.

If Rekordbox didn’t have the weird limitation then you’d have all your categories. I don’t really want to go through weird hoops to combine all LXC categories into 4 RB categories which would still be limiting in many scenario’s.

I did some testing with this and for the playlist filter tools they immediately refresh when you rearrange the MyTags folder order so you can even switch which categories you want to utilise for filtering for different use cases.

I guess my core argument is that the added benefits from being able to do better AND/OR combinations between tag categories in the playlist filter adds more value than having some tag categories missing. And that’s speaking as someone who has 7 primary tag categories in Lexicon. Additionally, not having the category name in every MyTag entry would look a good deal nicer and save screen real estate.

But when you open an intel playlist, it shows the red box which is super confusing to a user. So for me that really already blocks doing it that way. Even if it shows the right tracks in the intel playlist, that’s not really what RB is telling them. That’s confusion I can avoid and that is on the top of the list of important things. Now if Pioneer would fix this silly limitation, we’d have no problem. One can dream…

I guess, but they only see that if they are actively moving their MyTag categories around. And again, how many users are actually going to be making intelligent playlists in RB after shifting to Lexicon? I know I’m not…

I’d encourage anyone else reading this thread to share your thoughts but from my perspective, the vast majority of the Lexicon userbase either isn’t creating Intelligent playlists in RB after making the shift to Lexicon OR has 4 or fewer tag categories they make use of so it wouldn’t be an issue.

Now if Pioneer would fix this silly limitation, we’d have no problem. One can dream…

Also, would it not be better to be set up in a way where if/when Pioneer removes the limitation no further changes are required on Lexicon? Rather than potentially needing to migrate a users MyTags information from a single category to multiple later on?

If Pioneer fixes this then migrating won’t be a problem, because when you re-import the merge category then it should automatically split back into all categories in Lexicon. So all I then need to do is change the code and remove the part where it merges them.

I agree that most Lexicon users will not be editing their smartlists in Rekordbox. So a notice of this limitation could work but I really hate that the field is empty in RB with a red warning, even though the user is doing nothing wrong.

Since Lexicon tag came into the picture, I stopped using rekordbox completely. I was only using it for the mytag feature.

I agree that most Lexicon users will not be editing their smartlists in Rekordbox. So a notice of this limitation could work but I really hate that the field is empty in RB with a red warning, even though the user is doing nothing wrong.

Sorry, I’m gonna keep drilling on this point but I hate the idea of handicapping the (in my opinion) best part of MyTags in order to prevent an issue with an RB feature that most users won’t even touch because LXC already has a superior implementation.

any updates with the waveform showing up on the deck?

Lexicon can’t add a waveform, you have to analyze in RB for that. I don’t know how it works on a device though but I don’t think they can analyze right?

When going from RB6 to LXC do we still need to do XML export in RB6?

No, you can complete forget the XML when using these builds. XML is only for RB5 now.

Hi, trying out the sync functionality with RB6, and so far it looks great

One thing though, is the “Release Date” gets broken.